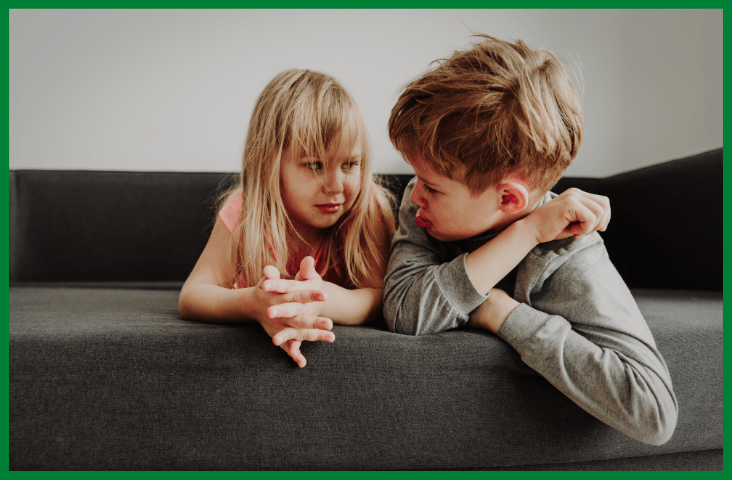 What I did not expect, however, were the challenges that I had felt very competent to handle as an educator, and yet now find so overwhelming as a parent. Yes- this has been very HUMBLING!!!

With three children (4, 6, and 8 years of age), I don’t know if a day passes by where my husband and I aren’t playing “mediator” or more accurately “referee” in some sort of sibling conflict (aka wrestle/war/battle). And I’m not sure if anyone else relates, but it always seems with three children, that most of the time at least two out of three are experiencing some sort of rivalry. (This also relates to relationships with cousins and “friends that are like family” too!). Some of the regular battles involve:

I wonder if for me, as a parent, conflict between my children feels more weighty and exhausting because it triggers ME!

When the little people that you love more than anything, who you are hoping and praying will be kind, gentle, and generous seem to bring out every quality but kindness in each other, it is triggering as a parent. For me, it stirs up a sense of overwhelm because as I watch these little people take out their frustrations on each other or even purposefully stir one another up, I can begin to feel inadequate. I can begin to feel as though I mustn’t be doing a very good job as a parent if my own children can’t show kindness to one another.

The crazy thing is, as an early childhood professional (and as a bit of a “brain science nerd”) when I stop for one second and pop my personal feelings aside, I can remind myself of some key truths when it comes to sibling conflict that I find very helpful:

1. Conflict between siblings is not only perfectly normal, it is actually to be expected. Just like learning to read or write is part of a developmental process requiring adult scaffolding and support, so too is a child’s ability to regulate their emotions, communicate, share and negotiate. These individual skills, form key parts of healthy social and emotional development in children that impact their long-term development as they interact with others. Just like learning to read or write, developmental progress does not happen without practice. Sibling conflict forms the perfect practice grounds for developing the essential social/emotional skills all children need for healthy long-term development.

2. The brain and how it develops is a little like building muscle – building muscle isn’t pain-free and neither is a child’s social/emotional development. Through the process of building muscle and becoming stronger, the muscle is “put to the test”. Small tears are formed but with the right “conditions” (rest, nutrition, stretching, etc), the small tears end up healing and the muscle becomes stronger. Sibling conflict is kind of like a gym workout. It’s where the “blood, sweat, and tears” (literally?!) happen so that with the “right conditions” (I’ll get to that down further), the pathways in a child’s brain that build skills to resolve conflict in a healthy way, get stronger. So, as a child develops, and they get a lot of practice “building the muscle” of negotiating, turn-taking, and communicating with their siblings, they are then able to transfer this skill into other areas over time (kindy, school, etc).

3. We are all our worst with those whom we feel will love us no matter what. Perhaps one of the reasons siblings (and those who are close like siblings) engage in so much conflict is because there is something very beautiful and powerful in being fully seen and known and still fully loved. I watch this in my own children- where one moment they can be arguing and yelling and crying, and yet the next, they will fierce-fully stand up for one another if anyone else dares to cause harm to “one of their own”. It’s ironic (and it drives me a little crazy at times), but it’s also beautiful. My children know that at the end of the day, no matter how ugly they get with each other, they love one another. And that love is pretty fierce!

So, we can’t avoid our children arguing, in fact, it can be the best place for learning to happen, but what role can we play as parents within this learning process?

Back to the “right conditions” in the healing part (in and through and after the “blood, sweat and tears”):

1. Model what skills and values we want to see in our children. Simple, but also super hard! For me, that looks like doing my best to listen, maintain a calm manner, and speak the truth in love and with kindness when there is conflict.

2. Say what you see to BOTH parties (no matter who is the culprit or instigator). This might sound like, “I can see Benny, that you feel hurt that your brother took the toy you wanted. I get it. Michael, I can see you have big angry feelings because Benny tried to take the toy back. It’s hard to think clearly when we have big feelings.”

By saying what we see, no matter who we feel might be to blame, we are supporting our children to understand their feelings but also to understand how their sibling is feeling. It’s not a blame game, but our choices as people ultimately impact others and our children need our support in these moments to make those connections.

3. Focus on supporting the children to “make things right”. (This might look different for different ages or depending on the situation). For example – “Michael, you can see how upset Benny is that you took his toy. I know you care about your brother. I love you both very much so how can I help you to make this right?” Conversations like this support and model problem solving, perspective taking and social responsibility.

There are so many more strategies I could share and so many different scenarios (I have a lot of lived experience), however, let me conclude for now….

Sibling conflict is messy, exhausting, and confusing because as humans we are messy and human development is complex! However, let me encourage you from one exhausted parent (who is often doubting herself) to another, that it is in the mess and the complexities of being human where not only do we have the privilege of shaping our children’s lives, but we too are being shaped and refined for the better. I know that when I can begin to flip my mindset on my children’s conflict, I feel far more empowered and capable to live out the values I also hold for and hope to see lived out in my children’s lives.

Heidi Denner is a wife, mum, and educator who is continually inspired by all she learns from the children she works with daily, (and in particular her own three children). As a mother to an autistic child, Heidi is an advocate for children’s needs, but also understands the significance of family mental health and wellbeing and how this is critical to a child’s overall development. As an avid reader and life-long learner regarding all things “neuroscience”, Heidi loves sharing current research regarding brain development so that families can understand how to best support their child’s needs and their own personal mental health and wellbeing.